The Blues have already qualified for the next stage of the Champions League after winning four of the five group games they have played so far.

Chelsea need to match Juventus’ result to ensure they finish top of their group and potentially get a more favourable Round of 16 tie.

Mateo Kovacic is down with Covid-19 and has self-isolated. He has not travelled with the team.

N’Golo Kanté, Ben Chilwell, Trevoh Chalobah and Jorginho are all out of with injuries. There are also doubts over Kai Havertz and Marco Alonso.

Edouard Mendy is likely to be benched for the match in favour of Kepa Arrizabalaga. Mendy had a poor game against West Ham United. Chelsea who have been impressive in their defence this season, have conceded five goals in their three previous outings.

The Blues will want to keep a clean sheet against Zenei, hence they would want Arrizabalaga to come in place of Mendy. Should Arrizabalaga start, it would be his first Champions League start for Chelsea this season.

Having leaked goals recently, Chelsea’s backline too will be under scrutiny. Tuchel is likely to start with a back three of César Azpilicueta, Andreas Christensen and Antonio Rüdiger. This being an inconsequential match with respect to qualification for the next round, Thiago Silva is expected to be given rest and Azpilicueta getting some game time.

Azpilicueta has struggled for minutes this season. He has appeared eight times for Chelsea this term, all in the Premier League. The Spaniard should make this opportunity count. 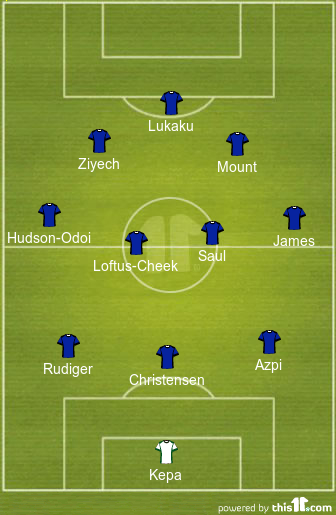 Chelsea’s midfield four should comprise of Reece James, Saúl Ñíguez, Ruben Loftus-Cheek and Callum Hudson-Odoi. Ñíguez and Hudson-Odoi are anticipated to start in place of Jorginho and Marcus Alonso in the Chelsea lineup.

The front three should see Mason Mount and Hakim Ziyech lining up with Romelu Lukaku ahead of them. Mount and Ziyech are in some goal scoring form. Ziyech netted a goal against Watford and Mount has scored two and assisted in two in Chelsea’s previous two games.

Lukaku, acting as the frontman is fully fit now and is expected to add to his goal tally of four goals after finally returning from a long injury layoff.

5 players who could replace Romelu Lukaku at Chelsea

5 players who could replace Romelu Lukaku at Chelsea